A Precious End to a Delightful Journey

Posted on July 6, 2021 Categories: Education No comments yet

The Holburne Museum in Bath is delighted to be the final venue for the touring show, Precious and Rare: Islamic Metalwork from The Courtauld, which was organised by The Courtauld in collaboration with the Subject Specialist Network in Islamic Art and Material Culture, and with support from Art Fund. Showcasing ten extraordinary highlights from The Courtauld’s collection of Islamic metalwork, this exhibition presents a remarkable opportunity see some of the finest examples of this craft from the 13th to 16th centuries from across the Islamic Mediterranean including present-day Iraq, Iran, Syria, Egypt and Turkey. Also on display are two examples of objects made in 16th-century Venice by craftspeople attempting to compete with the exceptional beauty and quality of the metalwares that were exported to Renaissance Europe from the Islamic Mediterranean.

The display, which is running until Sunday 1 August 2021, was originally scheduled to be shown in Bath over the summer of 2020, however the disruptions of the global pandemic meant that we had to rethink our plans. Our intention had been to show this collection in one of the Holburne’s dedicated exhibition spaces, in what would have been a small, focused display that sat separately from the Museum’s collection of fine and decorative arts. Restrictions due to Covid however, resulted in us being unable to open this space and so the exhibition moved to summer 2021 and to the Davidson Ballroom, where the metalwork is shown alongside some of the highlights of Sir William Holburne’s (1793–1874) collection of 17th-century European silverware, Italian Renaissance maiolica, and 17th- and 18th-century Imari porcelain. In moving the Islamic Metalwork exhibition to this larger gallery, we hope to have brought out some of the parallels between these collections, including connections between William Holburne, whose objects form the core of the Museum’s collection, and Thomas Gambier Parry (1816–1888), who purchased the Islamic metalware on display in specialist antiquarian shops in London, Venice and Croatia, where he visited in 1858. These two collectors were both acquiring works in the mid-nineteenth century and evidently shared an appreciation for the intricate technique and exquisite design of small, precious metalware and the rich colours and bold pictorial qualities of Italian maiolica ceramics. 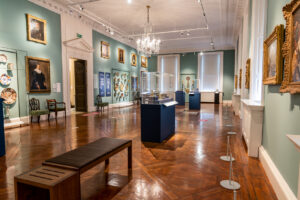 Precious and Rare: Islamic Metalwork from The Courtauld is shown alongside the exhibition, Canaletto: Painting Venice (on until 5 September 2021), which presents an important set of topographical Venetian paintings commissioned from Canaletto (1697–1768) by the 4th Duke of Bedford. The series has left its home at Woburn Abbey for the first time in more than 70 years and provides the chance to enjoy and study up-close these twenty-three remarkable paintings showing life in 18th-century Venice. By pairing these two exhibition, the Holburne offers audiences an opportunity to explore the role of Venice as an important historic trading route between East and West from the Renaissance until the end of the 19th century. Silver inlaid vessels from the Islamic Mediterranean were among the most sought-after luxury objects in Renaissance Europe, with Venice playing a pivotal role in maintaining close trade and diplomatic relations between East and West. Such was the demand for Islamic inlaid wares that 16th-century Venetian metalworkers began creating their own versions of such pieces, examples of which are on display in Precious and Rare: Islamic Metalwork from The Courtauld. A pair of candlesticks, for example, have a squat form with a moulded socket, depressed drip pan and wide trumpet-shaped base that demonstrates 16th-century Venetian design, while a dense pattern of Islamic-style foliage covers the entire surface. 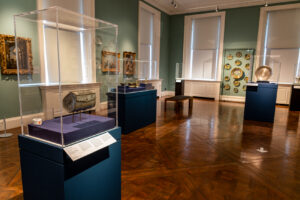 The highlight of Precious and Rare: Islamic Metalwork from The Courtauld is the Metalwork Bag, which is in its own dedicated case in the centre of the exhibition. The shape of this exceptional object is unique in metalwork and has had various functions ascribed to it. New research suggests it was made for a noblewoman of the Ilkhanid dynasty, a branch of the vast Mongol empire descended from Genghis Khan. The crowning feature is the banquet scene on the lid, which shows a royal couple surrounded by a retinue of attendants, including a figure to the right of the consort wearing a bag very similar to this metalwork object, suspended from his shoulder. Roundels on the front, back and sides contain musicians, revellers and elaborately equipped horsemen, one spearing a lion and the other with a falcon perched on his left wrist. The prominence of these two figures reflects the high status of hunting at the Ilkhanid court. 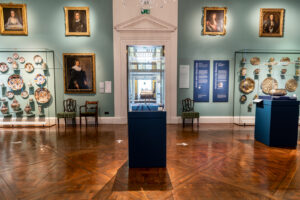 Precious and Rare: Islamic Metalwork from The Courtauld is the second major exhibition for which the Holburne has benefited from support from the SSN for Islamic Art and Material Culture. In 2018 the Museum held Bath to Baghdad: Ellen Tanner’s Collection of Middle Eastern Art, which showcased a selection of late Qajar metalwork, textiles, and carved woodwork and lacquer from the collection of Ellen Georgiana Tanner (1874–1937), who was among the first British women to travel solo to the Middle East in the late 19th century. In 1894 she set off by steamer to Baghdad, Iraq, beginning a journey overland on horseback into Persia (now Iran) accompanied by local guides, staying in caravanserais along the route, and exploring the bazaars of Baghdad, Shiraz, Teheran and Isfahan where she bought contemporary handicrafts and antiques including historic tiles from ancient buildings. We are currently in the process of planning a dedicated permanent display that will showcase the richness and quality of the Middle Eastern decorative art that was given by Miss Tanner to the Museum.