Posted on May 14, 2020 Categories: Uncategorized No comments yet

In 1751, physician John Wall and apothecary William Davis established a ceramics factory on the banks of the River Severn in Worcester. Using a formula developed in Bristol, they began to produce soft-paste porcelain wares. The manufactory was a success, and would continue to go from strength to strength. Under the aegis of new owners Flight & Barr, the company would be granted a royal warrant by George III in 1789 and would thereafter be known as Royal Worcester. 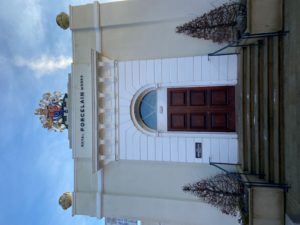 One of the buildings formerly part of the porcelain works

The Museum of Royal Worcester, situated on the location of the former factory, houses the world’s largest collection of porcelain produced by Royal Worcester. The museum holds over 10,000 ceramic objects, dating from the start of production in 1751 up to the closing of the factory in 2009. Such a comprehensive collection allows the development of ceramic wares in England to be traced through the eighteenth and nineteenth centuries. Some of the most lavish services to come out of the factory – those produced for the Prince Regent (later George IV) from 1807 onwards – betray the inclination towards Chinoiserie and Japonaiserie in the factory’s nineteenth-century production. Each item produced for the Prince Regent was different, but many drew on Japanese Imari or Chinese Famille Rose patterns.

However, Royal Worcester’s designers also drew inspiration from designs and shapes originating in the Islamic world. From the early-nineteenth century, Royal Worcester both produced items and services for notable clients in the Middle East and its neighbouring countries, as well as garnering shapes and motifs from the ceramic productions of the region. One of the earliest examples of this is a suite of objects bearing the portrait of the shah of Iran at the time, Fath-ʿAli Shah (r.1797-1824), and his heir presumptive ʿAbbas Mirza. 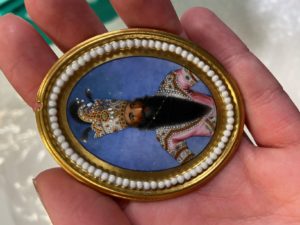 Some such objects bear not only Islamicate designs but also inscriptions in Arabic. It was these that I was able to research and help catalogue as part of the Islamic SSN’s Calligraphy Support Scheme. While the collection at Royal Worcester is generally well-researched, particularly thanks to the indefatigable father and son team of Henry and John Sandon, the connections between Royal Worcester and the Islamic world remain largely unstudied.

One example from this group of objects, now housed in the Museum of Royal Worcester, is a plate from a service produced in Worcester for the Nawab of the Carnatic, Azam Jah (r.1819-1825), around 1820. 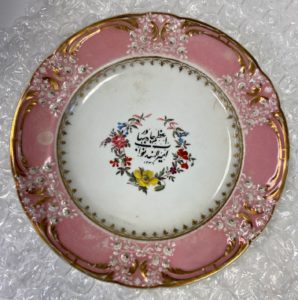 Plate from the Carnatic Service

The order for the service was placed in Madras, through the import-export firm Griffiths Cooke & Co, and comprised over 1,000 pieces, including dinner wares, desert wares, and a breakfast service. The order was so large that it was not completed and shipped until 1823, even though it had been ordered in 1820. It sailed to India aboard the private ship, the Windsor Castle, under a certain Captain Lee.

The piece with which we are concerned here is likely to have been part of the breakfast service, owing to the pink of its relief-moulded border with gilding – the dinner service has a dark blue border. Each item in the dinner service also bore the depiction of a different botanical specimen. From irises to lilies, myriad kinds of flowers were depicted, all inspired by images in Curtis’s Botanical Magazine – a highly popular publication at the time. All of these pieces were produced in one factory in Worcester, that of Chamberlain. 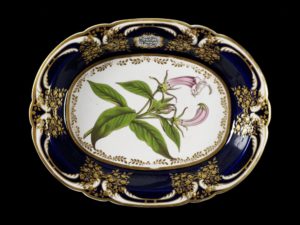 In the early-nineteenth century, Royal Worcester production was shared across a number of factories. Robert Chamberlain, formerly head of decorating for Dr Wall, would go on to open his own factory in 1783. The Chamberlain manufactory produced many services, largely in hard-paste porcelain, for the most fashionable figures of the time. Having visited the factory in August 1802, Admiral Lord Nelson and Lady Hamilton commissioned a lavish service in ‘Fine Old Japan’ pattern. It would be also be the Chamberlain factory which would produce the all-important service for the Prince Regent, mentioned above. 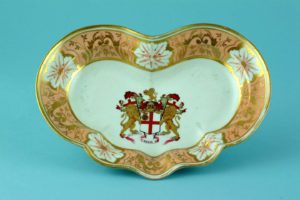 During its nineteenth-century heyday, Chamberlain was exporting large quantities of porcelain to India, and would produce services specifically for customers in India too. The services ordered in 1817 for the East India Company (EIC) headquarters at Fort St George, Madras were the largest ever made at Worcester – the order is reported to have included more than 7,000 items and cost a huge £4,190, 4 shillings.

The East India Company had a relationship with porcelain which stretched back much earlier than the commissioning of this Chamberlain service. The Company exported significant amounts of Chinese porcelain from the late-seventeenth century onwards, which brought with it significant changes to the consumption and use of ceramics in England. Particularly notable is the increasing popularity of so-called ‘armorial wares’ – ceramics pieces bearing crests. Prior to the production of porcelain in England, which began in the 1750s, these were all commissioned specially from porcelain manufacturers in China – largely facilitated by the EIC. After this date, the fashion was continued through production in England, as seen in the service produced for the EIC in Worcester.

The plate from the Carnatic Service is further evidence of the fashion for and circulation of English porcelain in India at the time. The service was commissioned by the then Nawab of the Carnatic, Azam Jah. The Nawabs had ruled over the Carnatic since the late-seventeenth century and would continue to rule throughout the nineteenth century, although largely in name only. Following the Carnatic Wars of the eighteenth-century, fought between the French and English East India Companies vying for control over the south of India, and as proxy wars for conflicts in Europe, the English emerged triumphant. British support for the eventual victors in the struggle over the Carnatic, led by Muhammad ʿAli Khan Wallahjah, left them heavily in debt to the EIC. By 1801, the Company would use this debt as leverage for the annexation of the region. The presence of the EIC in the Carnatic not only had these well-known political ramifications, but would also have had an effect of the material culture of the local courts. 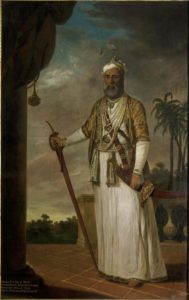 While it may not look like it on first inspection, the piece with which we are concerned here comes under the umbrella of armorial ware. While the Nawabs of Carnatic did not have a crest in the European style, they could use their name and title to represent themselves, in the same way that a crest can be used to personalise an object. The inscription in the centre of the plate gives the name and titles of Azam Jah (Amīr al-hind nawāb aʿẓam jāh bahādur) and the date in the Islamic calendar, 1236 (equivalent to 1820). On the dinner service, this inscription functions even more like a crest, in a shield-shaped medallion edged with gilding, on the border. Just as the English clients of Chinese porcelain manufactories would have sent out a drawing of their crest for use on their new services, so one can imagine that Griffiths Cooke & Co. would have been responsible for the details of the order, including sending the Arabic inscription to be copied by the decorators in Worcester. 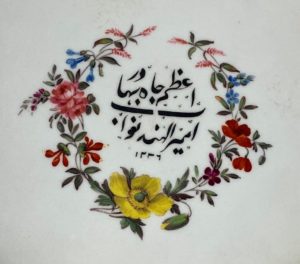 Detail of the central inscription

Within this small plate held at Museum of Royal Worcester, therefore, are reflected many moments of cultural exchange of various kinds, including the burgeoning globalisation, commodification, and colonialisation of the early-nineteenth century. The full story of how this particular plate ended up back in Worcester isn’t clear, but the services are now dispersed. Some pieces are held in other collections, such as the V&A, and many more are now in private hands – examples of an originally Chinese ware, produced in England, in a distinctly English style, for a customer in India, representing himself using Arabic titles, now scattered around the world.

Islamic Art and Design Taught School Workshops at the Ashmolean